How to get support

Music bypasses all the senses and goes straight to the soul

Ken Morton, who heads up Client Engagement at Network ROI, talks about his long career in IT and his passion for music, guitars, and Social Enterprise: 12Guitars.org There is nothing more satisfying than meeting a client and they tell you they are really pleased they chose you as their IT services supplier.

Ken first got involved in computing in March 1980 with Philips Data Systems just as Micro Computers were coming onto the market.

Philips had just launched a PC but it was overshadowed by the excellent ACT Sirius which was far more competitive.

In 1984 Ken and two business friends then launched one of the first Micro Computer companies in Scotland: Select MicroSystems.

We saw an opportunity and became resellers for the ACT Sirius and the brand developed into Apricot Computers that were well ahead of the curve in the 80s.

The Apricot XEN from the 1980s, it was one of the most innovative micro computers of its day, complete with an integrated phone.

Apricot Computers sold computers to companies investing in their first-ever office computer systems and over 10 years built a client base of around 400 with 3 offices: Glasgow, Edinburgh, and Kilmarnock.

Our consultancy was in personal contact with around 50,000 key IT buyers in the UK. These were companies and organisations of £2Million turnover up to £100 Million.   Our role was to keep a finger on the pulse of IT suppliers and garner statistics of the best of these to introduce to corporate IT buyers looking for ideal solutions.

As a result, the IT consultancy was involved with £Millions of investment in IT solutions from Network Systems to Financial Applications, from Production Software to HR Solutions and everything between.  Clients included many small to medium-sized IT firms as well as some big names in IT: BaaN, SAP, SAGE, Pegasus, Cable & Wireless, and many more.

The business model was devised in 1976 and worked extremely well for over 40 years but the Internet changed the business model from known, trusted IT advisers to self selection of applications via online searching.

Ken has seen many changes in how business is conducted over four decades in business and he still firmly believes in the personal touch.

Ken firmly believes that the best outcomes, when selling business solutions, come about when key people from the buying and selling companies have a genuine personal connection, built on mutual trust, and they work on solving the client’s problems together.

The happiest clients are those that have really benefited from the transaction, who feel valued and cared for throughout their IT support contract.

Ken has worked in many sectors for IT companies over several years, bringing his experiences to bear where it was needed. His roles have included helping a Scottish network and cabling company to expand into England, helping a specialist London based company open offices in Scotland, providing professional sales training courses, working in the Digital Marketing sector, Cyber Security sector, Financial Services sector, Hospitality sector, and the Production Engineering sector amongst others.

The common denominator to lasting success in all these business sectors is the building of strong business relationships coupled with a genuine desire to work towards solving the client’s needs.

Sincerity, commitment and focus to ensuring real benefits were realised for the buyer always won the day and built long-lasting client relationships.

Ken has had a lifelong interest in music and has played in a Rock/Blues band since he was 15. He still plays and gigs regularly in his own band: ‘Papa Mo Blues Band’ and has many written songs and has two albums now released.

Ken's passion for guitars has led him to build his own electric guitar brand (Morton Guitars) and outside of his IT career, he is a director of 12Guitars.org, a fast-growing Social Enterprise. 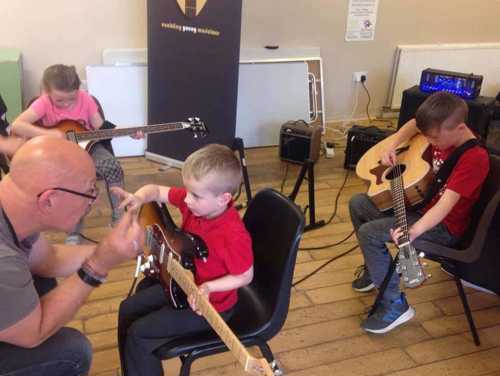 Follow us for company updates, industry insights and advice on how you can make the best use of technology